From Ugly Sweaters to the Grinch, here are the most absurd Christmas-themed Sneakers!

If you own or have coveted at least one of the following Sneakers, then you’re in this category too.

Here’s a mini-list of the most curious and rare releases, dedicated to Christmas

Sean Cliver closes out 2020 with one of the coolest Christmas releases.

The Dunk Low ‘Holiday Special’ offers an evocative feel of snowy landscapes north of the Equator: the sleek pale blue suede upper evokes crystalline ice, the white part looks like soft snow, while the icy sole is embellished with gold glitter, as is the Swoosh. Elegant and refined, this Sneakers is one of the most successful Christmas themed ones. 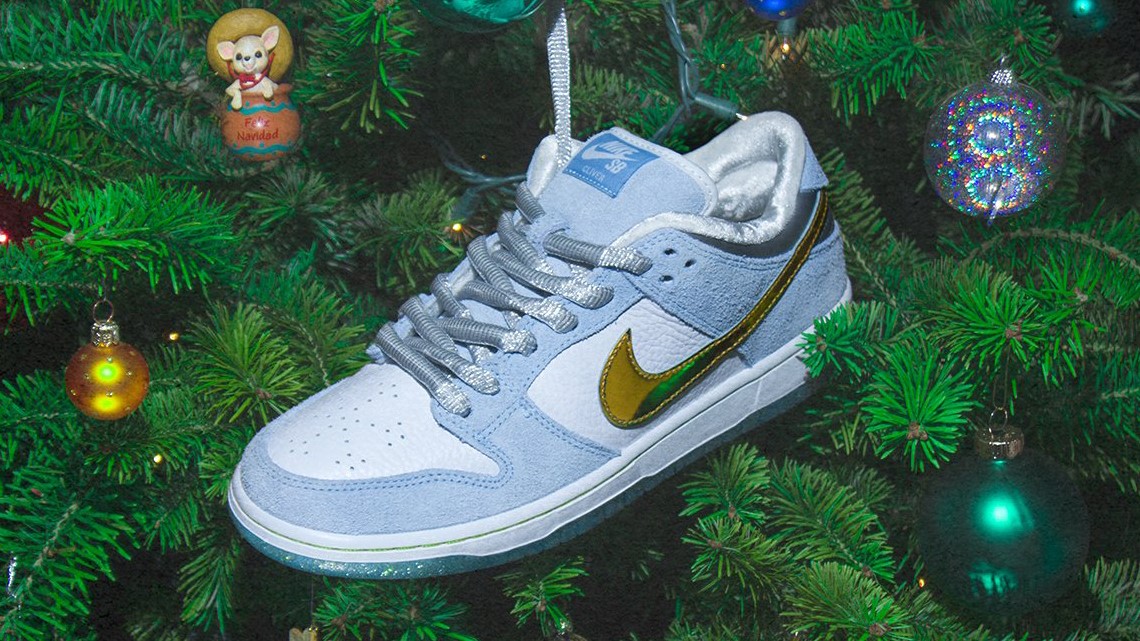 Inspired by the 80s cult Christmas Movie “Gremlins”, this special edition of the adidas Stan Smith sports a brown and white upper, just like the fur of the cute and weird animal protagonist of the movie, Mogwai aka Gizmo.

On the heel, two “creepy” little eyes peeking out from the side.

As opposed to all the colors associated with Christmas – red and white above all – these adidas are completely detached from the classic standards, while remaining in theme. 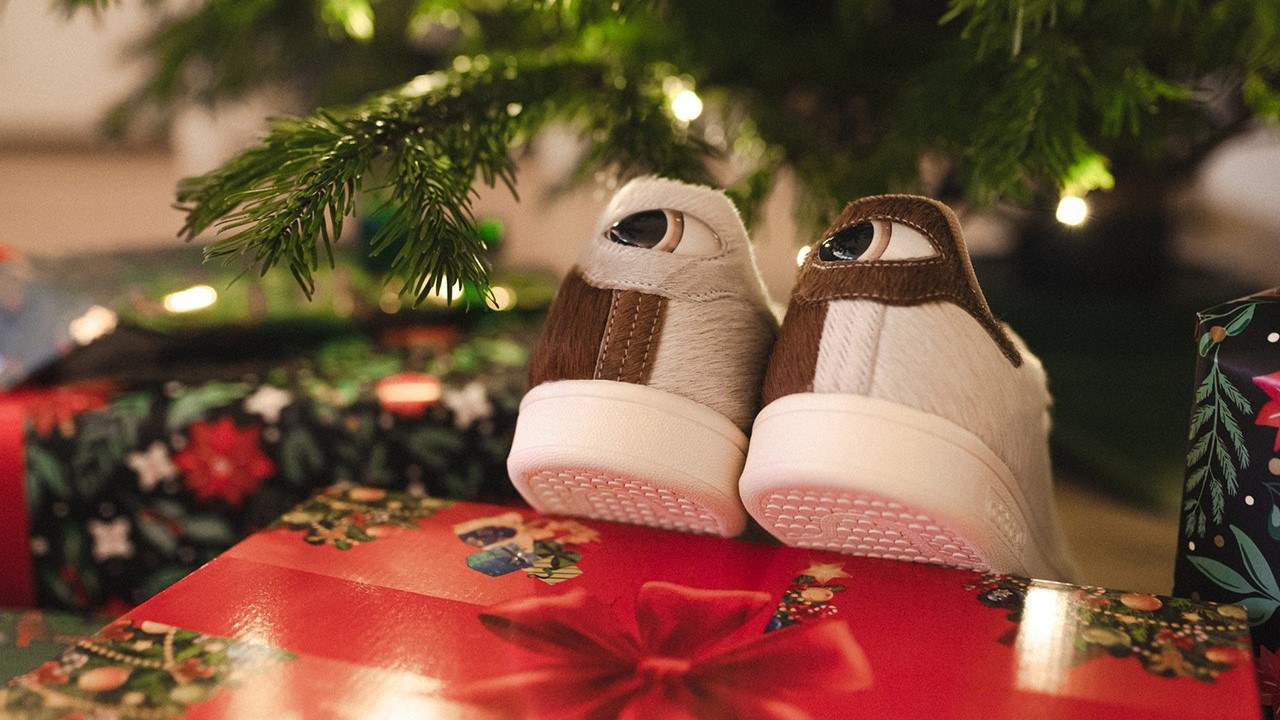 One of the most beautiful Christmas Sneakers ever are the Nike SB Dunk Hi Concepts Ugly Christmas Sweater: a declaration of love for the “Ugly Sweaters” that friends and family wear during Christmas parties.

The upper has a multicolored pattern with gingerbread men, snowmen, gift packages, while the Swoosh and laces are blue. 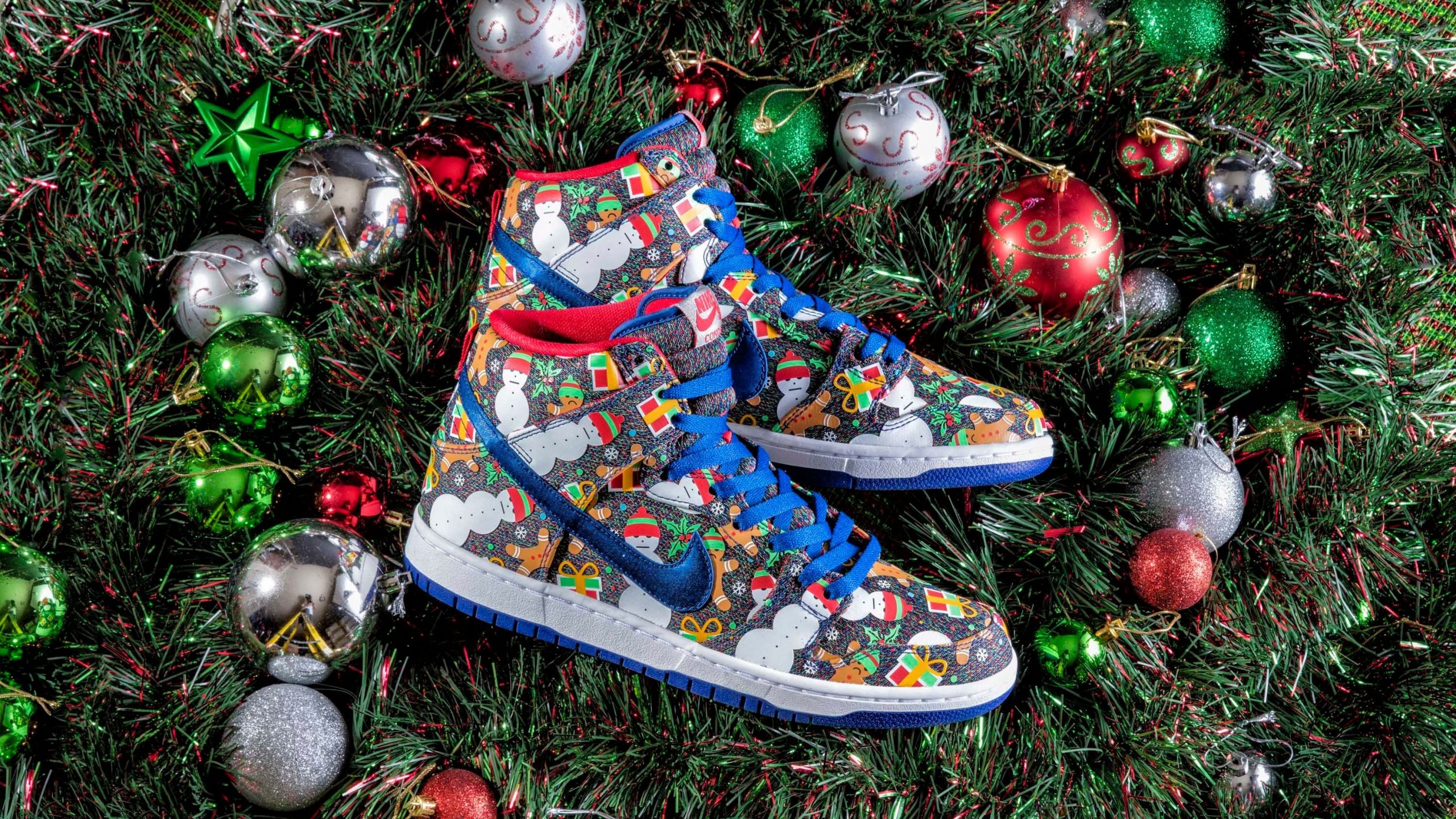 Generally, the Christmas is associated only to the figure of Santa Claus: a bearded man, dressed in red, reassuring and good.

Actually, there are many countries that have creatures and legends related to this famous holiday: Italy has the Befana, a witch who arrives right after Christmas, Iceland has the Yule cat, who roams the countryside eating people who have not received new clothes by Christmas Eve, while central Europe, in particular Germany, has the Krampus.

The Krampus is a scary monster, halfway between a goat and a demon, who accompanies St. Nicholas on Christmas Eve to punish children who have been naughty during the previous year.

The ancient legend of Krampus has inspired Sean Cliver for his collaboration with Nike, for the special version of the Dunk High of 2012. The upper is almost entirely glossy black leather, while the heel is covered in red “fur”; the insoles feature a 1920s illustration of Santa Claus pulling the Krampus’ long red tongue. 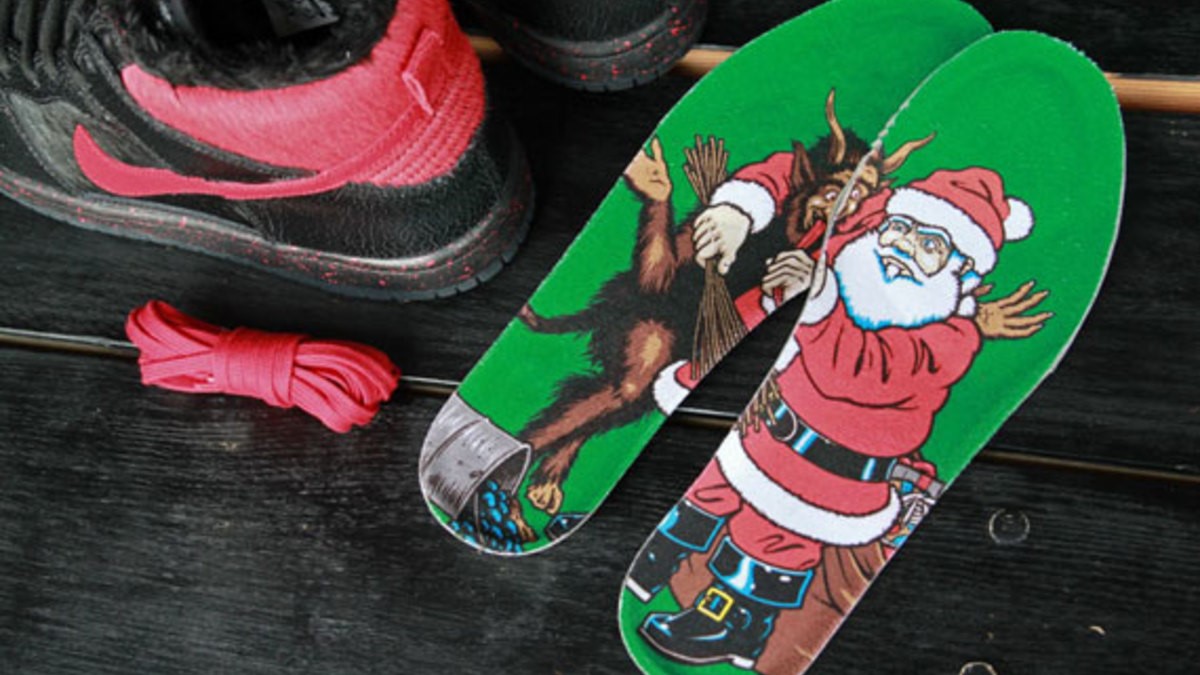 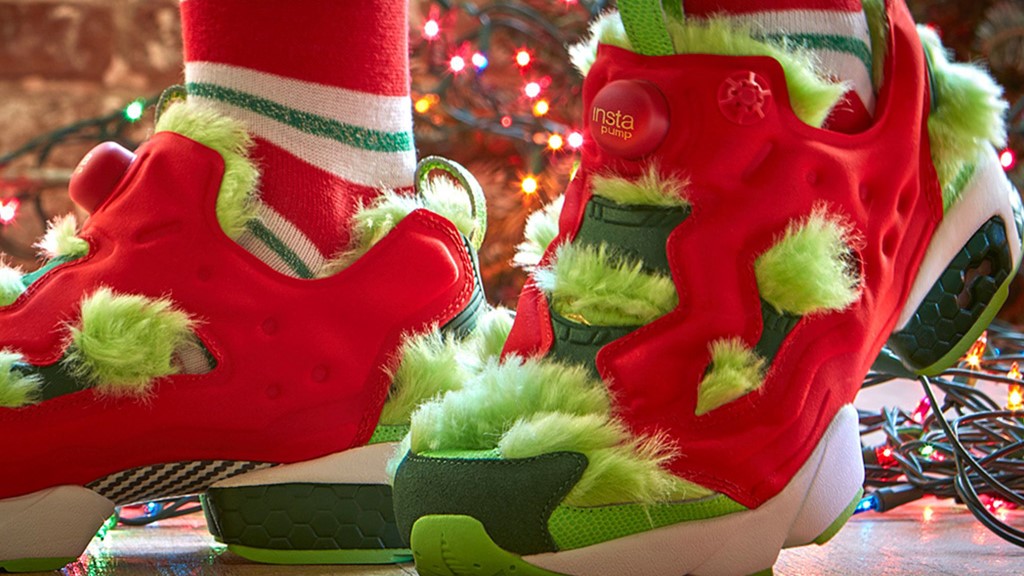 A super sweet red and white “candy cane” style upper entirely covers the silhouette of this 2015 release. Completing the look of the SB Dunk Low is the pure white Swoosh, red midsole and grass green cushioning. 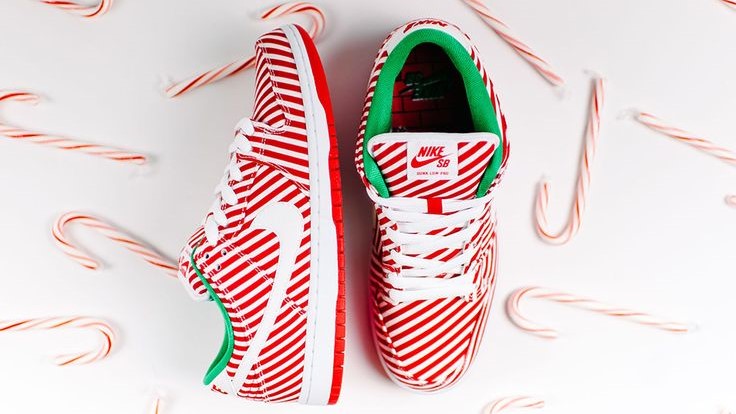 The cozy atmosphere of the Northern Europe Christmas was the inspiration for this 2020 Nike pack.

The upper has wool inserts with the typical pattern of Northern Europe; the inner part is fully padded with synthetic fur, up to the instep: the feeling is to be wrapped in a warm blanket! 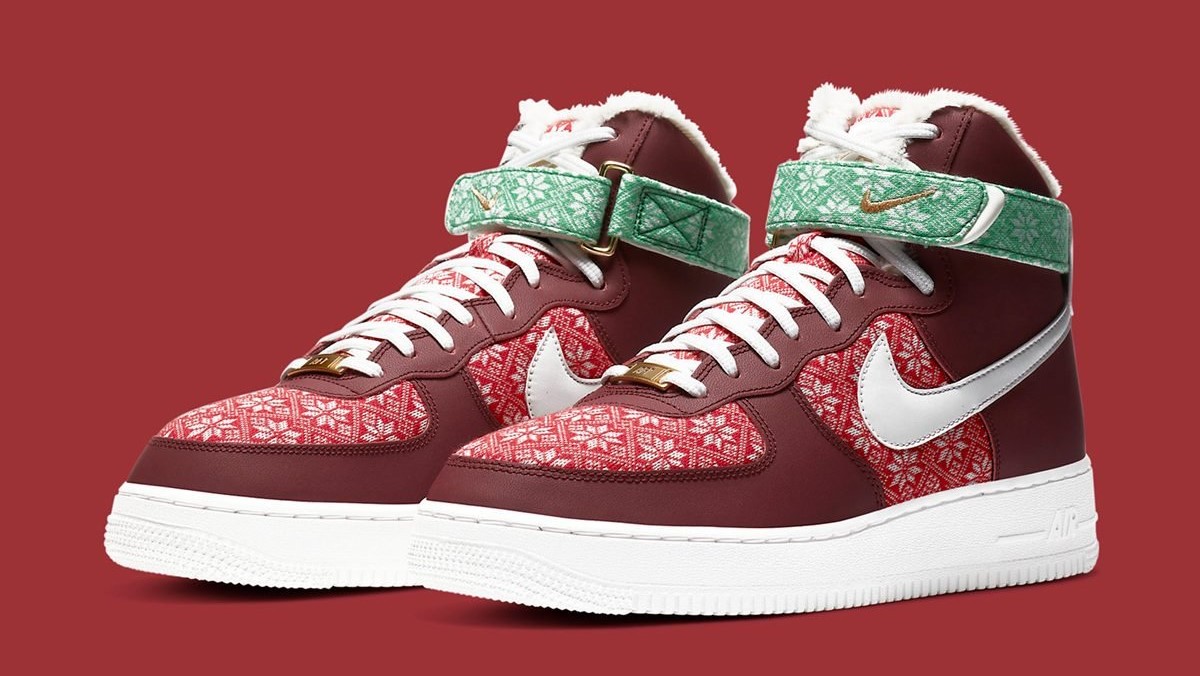 Vans’ Christmas 2019 Release was dedicated to one of the most beloved animated movies of all time, Nightmare Before Christmas.

The upper of the Sk8 Hi was transformed into one of the most memorable scenes from the movie, when protagonist Jack Skellington explores the Holiday Woods.

As if wrapped in wrapping paper, the 2015 Air Max 90 release is definitely worthy of being on this list.

Its upper has a “crumpled” effect and an all over Swoosh pattern, Christmas gift card style. Gold-colored details here and there, like the heel tag and fir green laces.

The flair of Tyler the Creator, creative director of Golf Le Fleur, is perfectly expressed in this Converse One Star Low release, inspired by the anti-hero of Christmas, the Grinch.

His infamous acid green fur entirely covers this Sneakers,  Above all with an ironic and funny effect. 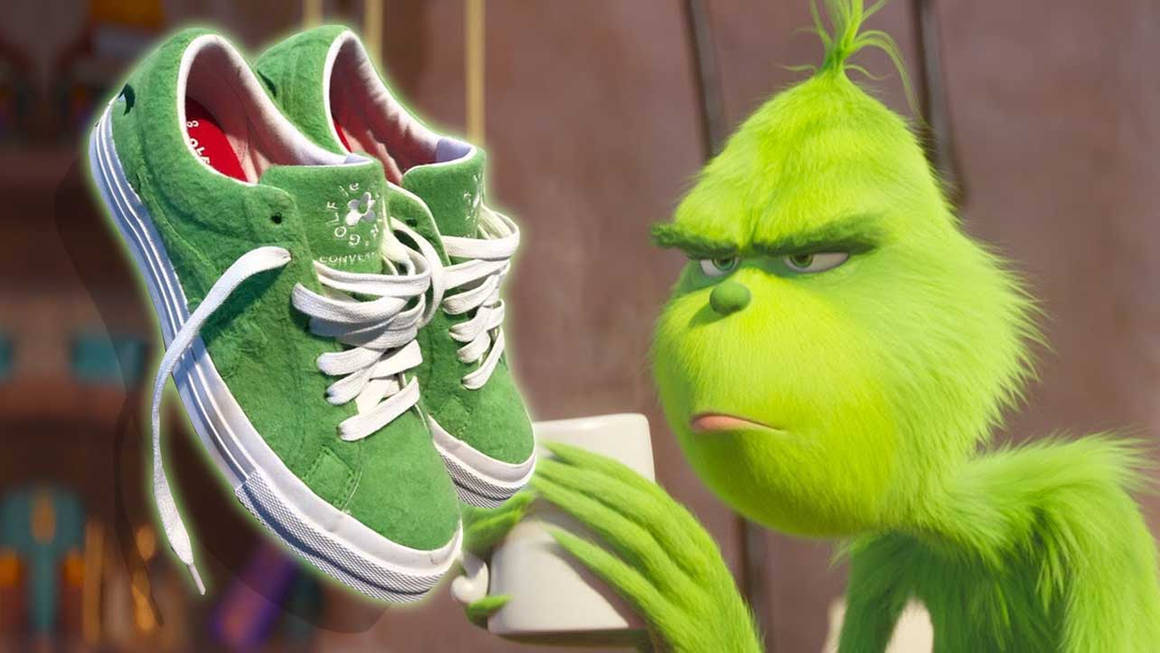