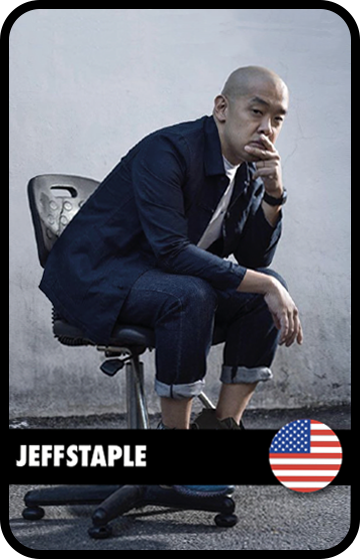 He basically started the modern sneaker-game and hype culture as we know it today.

In what direction the industry (street culture & fashion) is going with these worldwide changes ?

We are in the middle of unprecedented times right now. For the first time ever, everyone in the world is affected by the same exact thing. Everyone is fighting the same battle and that’s really unprecedented, it’s really like a world war right now and this forces us to prioritize a lot of things.

Right now priorities like family, loved ones and health and well being are really at the forefront.

Right before Covid happened, a lot of people were caught up in materialism and now, in such a small amount of time, the priorities have just shifted.

Brands that are truly real to their customers, true to their DNA, have been surviving and they’ve actually been doing really well and Staple is an example of that, we’ve been (knock on Wood) thriving through Covid and I can’t believe it.

What cultural or sub cultural movement has influenced your life the most?

Well, that’s an easy answer, it’s hip-hop. The sub culture of hip-hop, which is now mainstream, back in the mid 70s early 80s, when I was born, was a sub-culture. It was a thing that really influenced me the most and its fitting because now in America and in certain parts of the world we are facing another virus which is the racism virus which hasn’t been eradicated yet and is actually getting stronger than it looks like.

It’s really interesting to see how the Black Lives Matter movement has really impacted society recently and a lot of creators and a lot of successful designers artist and brands have really been inspired by black culture and hip hop culture and right now, in this time, where we want to give back and we want to recognize it, it is so important to do that right. We’ve all taken a lot from black culture and it’s time to give back.

What do you collect and what is the most important piece of your collection?

Unfortunately I collect a lot of things. I’m one of those people that enjoys collecting many of the same thing, so you can really understand the nuances and the differences.

“If you have 50 Nike Air Force 1s whites from different years, you’ll be able to see the small subtle differences”

in each of those models and that’s what the advantage of being a collector is, so I collect sneakers and old t-shirts, streetwork memorabilia, magazines, books, comic books so I have a lot of collections. I love watches and I think it’s an amazing mechanical scientific creation that implements a lot of esthetic, beauty and design. There’s craftsmanship involved that is really unprecedented and insurmountable in terms of the amount of work that goes into a watch, so watches are a favorite of mine and one of the most prized pieces in my watch collection is a Rolex that my wife gave to me. There’s some sentimental value because, not only there is craftsmanship and value to me but it’s also a gift from my wife which is something I’ll cherish forever.

What artist would you like to have a face to face conversation with?

Great question. I like some very unique artists and not a lot of the most usual. I like a lot of artists but one of my favorite, maybe the most favorite, is a Japanese artist who was based in New York City, his name was On Kawara. He was maniacal, very productive and so obsessive about his work that to me takes a level of mental thought to be able to get as deep as he did. I’ve read a lot of books about him and some say he suffered from almost insanity and bipolarism and schizophrenia and he had a lot of things he was working on emotionally so I really admired how he was able to take those mental issues and put them into artwork and the artwork was obviously a soothing sort of therapy for him. I’m almost the opposite of that when it comes to my mental state, I’m always very controlled and regimented and really try to hack my brain so that it becomes the most effective it can possibly be, so I really admire people who are able to just let their brain go to certain places they can’t control while I’m such a control freak so that’s something I am just jealous of: being able to let the feelings and emotions go and have it come out of your hand.

Urban Jungle and Staple have done a collaboration back in 2016. How do you choose a brand or artist to collaborate with? And how do you think the collaboration world will change?

We choose our collaborations very organically and very authentically. Sometimes you’ll see us do something with Nike and is an obvious choice, but sometimes we’ll do collaborations with people no one has ever heard of and we just do it because we feel very passionate about it. We recently did a collaboration with Cole Han which is a huge footwear brand globally known, multibillion dollar organization and then in the same week we did a pigeon design contest and a kid from South America, who no one has ever heard of, won voted by the public, so we did a collaboration with him and we sold tons of shirts in a very short amount of time. It was great giving this kid shine and spotlight all across the world. But then we also worked with this globally renowned company. I always want to keep doing that, keep working with brands and entities that represent different parts of the world, different demographics but also different audiences too. That is one of the most important things about collaborations, being able to mix all these things together, because that’s when you start creating new things.

How do you think collaborations will change in the world?

Because us, as humans, want to interact with other people, we’re going to be doing a lot more of those things and there will be more collaborations. For the Black Lives Matter movement we recently did a fundraise where we worked with my friend Hiroshi Fujiwara in Tokyo and the legendary graffiti artist Futura. For Hiroshi & Futura and myself to come together and do something is amazing but I would argue that if it wasn’t for Covid we wouldn’t be able to do that because all three of us would have been doing our own things.

The collaboration was able to come out and at the same time we were able to raise a lot of money for a good cause.

Thank you Urban Jungle, it’s been amazing working with you guys, I hope to keep getting the support from you guys.